Psyllium husks have a high content of dietary fibres that help to stabilize and regulate the digestion, stabilize blood sugar and support beneficial bacteria in the gut. We have a unique variant:

SylliFlor® - crunchy and tasty psyllium husks that do not get sticky in your mouth. The secret? Our husks are coated! 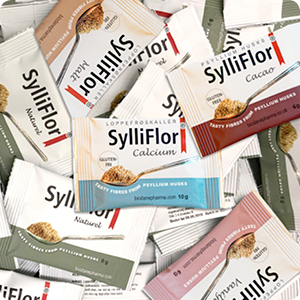 Psyllium husks are the small delicate husks around the seeds on the psyllium plant (Plantago ovata) also known as Ispaghula. The plant is native to northwestern India where the majority of the global production is still found today.

Psyllium husks are one of the most recommended food products for everyday fibre supplementation. They contain 85% dietary fibres (soluble and insoluble) which makes them one of the most fiber-rich plant parts known today.

Dietary fibres are known for their ability to regulate and support the digestion and promote the growth of the beneficial bacteria in the colon. In other words, these fiber-rich husks make a great contribution to a healthy digestion.

Dietary fibres for the digestion

Dietary fibres help regulate the digestion. This is caused by their ability to absorb large amounts of liquid in the gut. Due to their very high content of dietary fibres, psyllium husks can bind up to 40 times their own weight in liquid. For this reason, psyllium husks are recommended for people who want help to stabilize their digestion.

When psyllium husks mix with water in the gut they form a slimy, gelatinous mass. This increases the amount of mass in the gut, which stimulates the gut movements (the peristalsis) that provide the transportation of the mass through the gut to avoid constipation.

The slimy and gelatinous consistency of the mass also eases the transportation through the entire length of the gut. Normal transit time in the gut is 12-42 hours, but a diet rich on dietary fibres increases the speed and thus lowers the transit time. It all contributes to regular – and more comfortable – visits to the toilet.

The slimy, soft mass also stabilizes the digestion and minimizes the risk of both a loose and a hard stomach. The fibres in psyllium husks suck up the excess liquid in the gut in people with a loose stomach making the gut contents more solid. In addition, any hard lumps stuck in the gut (constipation) are encapsulated in the slimy mass, which eases further transportation.

Dietary fibres for the gut bacteria

An important feature of dietary fibres is the lack of degradation by the enzymes found in the human gastro-intestinal tract. Thus dietary fibres arrive almost undigested in the colon where they are fermented and digested by the gut bacteria, the microflora, that simply lives on fibres.

Luckily, the bacteria most dependent on dietary fibres as food source are the so-called ‘beneficial’ bacteria. This group includes e.g. bifidobacteria and some lactic acid bacteria. Thus, a higher content of dietary fibres in the food increases the amount of beneficial bacteria in the gut. At the expense of the non-beneficial bacteria. During the fermentation of the fibres, the bacteria create several nutrients that are absorbed over the gut and used in the rest of the human body.

Recent studies have shown that the microflora in the gut is closely connected to the general state of the human body, but a deeper understanding is still lacking. However, much evidence indicates that the gut bacteria can influence health, mood and weight. It is thus utterly important to take care of the gut microflora, and the best way to do so is to eat enough dietary fibres every day, e.g. psyllium husks.

In the gut, the gelatinous mass encloses all other food, prompting a slower digestion. The carbohydrates are thus released and absorbed at a low and steady pace over a relatively long time. This creates an equally slow and steadier pace in the rise of the blood sugar levels and minimizes the risk of drastic fluctuations.

Eating psyllium husks often gives a clear feeling of fullness. This is once again due to the high amount of dietary fibres and their water-absorbing feature. When the husks absorb liquid they swell and develop into the already mentioned gelatinous mass that provides a feeling of fullness and makes the uptake of carbohydrates in the gut more slow and steady.

The British Nutrition Foundation recommends that an adult’s daily intake of dietary fibres should be 30 g (read more on: https://www.nutrition.org.uk/healthyliving/basics/fibre.html), but on average the British people consume much less – about 18 g per day.

It is important to have a daily fibre intake that meets ones needs. If there are difficulties in getting enough fibres through the daily meals, it is efficient to use diet supplements with a high content of fibres, e.g. psyllium husks.

Psyllium husks for everyone

Psyllium husks are gluten free and may thus be consumed by everyone with a troubled stomach or with the wish to increase the intake of dietary fibres. No matter whether you are flexitarian, vegetarian, vegan, on the FODMAP-diet or something else. In addition, psyllium husks contain practically no carbohydrates and have no effect on the blood sugar levels.

We market a very special variant of psyllium husks: SylliFlor®. Our psyllium husks are coated. This makes them crispy and tasty, and in addition, the coating prevents them from getting sticky in the mouth.